Congratulations! You have just been accepted and will soon be paying a high price tag for a worthy education at Columbia University in upper NYC.  As if waiting to get accepted didn't already make you nervous and sick to your stomach, you now have to deal with the realities of ACTUALLY attending the university.  At the top of your bucket list is going to be dealing with the fact that you will need to move to NYC into an off campus housing apartment situation ideally as near and close to Columbia University as possible.

One top criterion each student is going to have for off-campus housing is going to be the proximity between where you live to the university campus.  And by proximity, the term is generally around commute times and how quickly you can get from home to campus.  Generally, everyone can agree that an ideal commute time would be right around the 30 minutes, maybe 40-minute mark.  No one really wants to spend that much time commuting unless they absolutely had to.  That commute time would constitute as an apartment near Columbia university

Locating Columbia University On The Map

Before getting into the specific areas that will be of interest, let's take a step back and look at where Columbia University is located in Northern Manhattan.  The main area of CU starts at 114th street through about 124th street all on the west side of Manhattan. 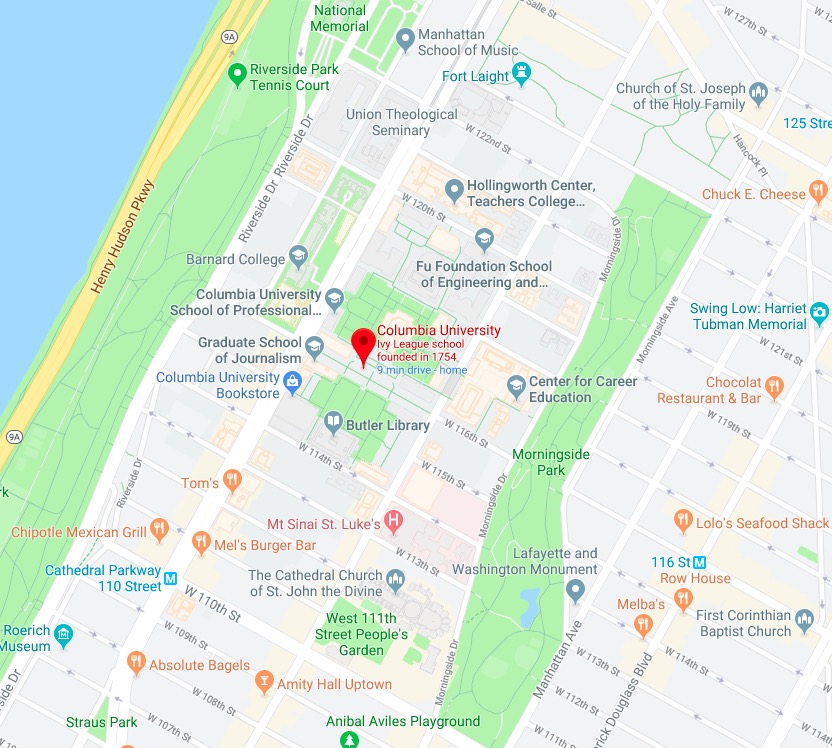 In retrospect, even though Columbia is actually IN Manhattan, it is far away from the real hustle and bustle mean streets of NYC that begins in Midtown Manhattan and goes all the way down to the bottom, which is what is usually depicted on television and in the movies.  Though it's not far in terms of distance (4 miles | 6.4 km), it's just that every neighborhood in Manhattan is so dense that it forms its own identity.  In NYC relative terms, the area of Columbia University is far away from the craziness. 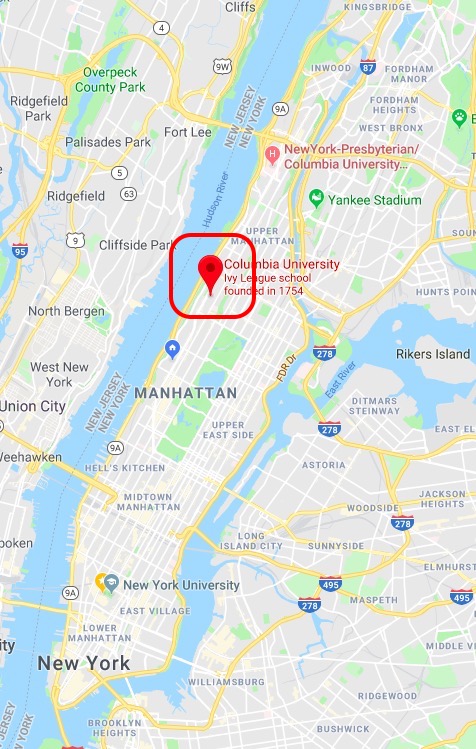 Commuting to Columbia University by subway drastically expands the off-campus housing options making those apartments near columbia university.  It allows you to consider multiple neighborhoods North and South of campus.  NYC subways are quite fast and run frequently.  We're talking about a subway arriving every 5 minutes which means you rarely have to follow a schedule, stare at the time or rush to a subway because if you miss one, you know another one is arriving shortly after.

Your best friends are going to be the subway lines: Red 1 | Blue A, C | Orange B.  As long as you live near any of these subway lines, your commute time to campus will be within 30 minutes and you will get off at any of the subways stops right around the corners of campus. 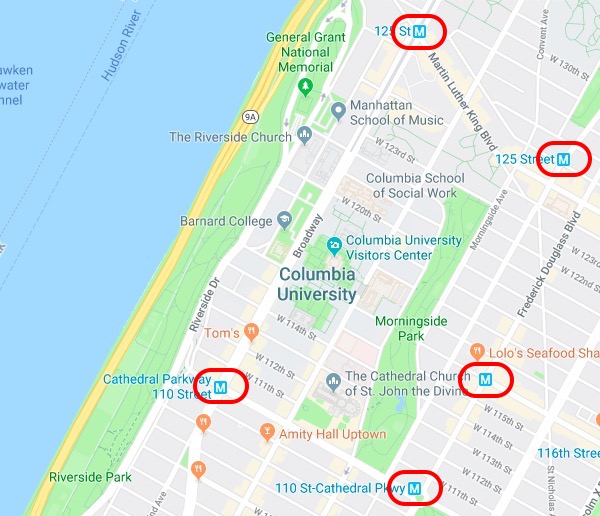 You can look for apartments as far North as 181st street or go down as far South as 66th street.  As long as you are sticking to the west side of Manhattan, you will be walking distance to one of those subways that gets you to campus very quickly. 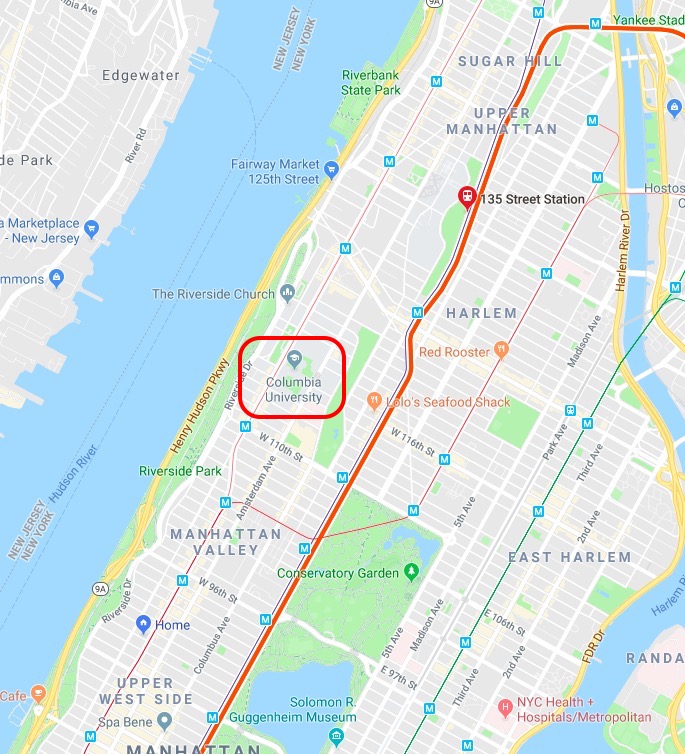 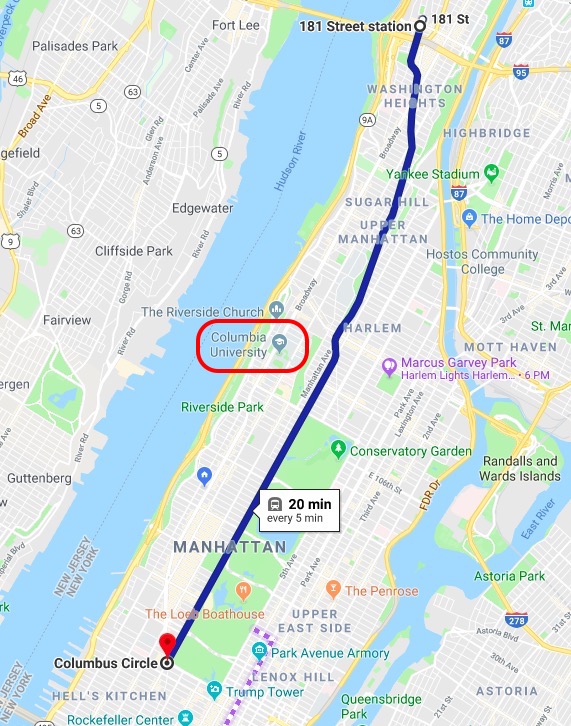 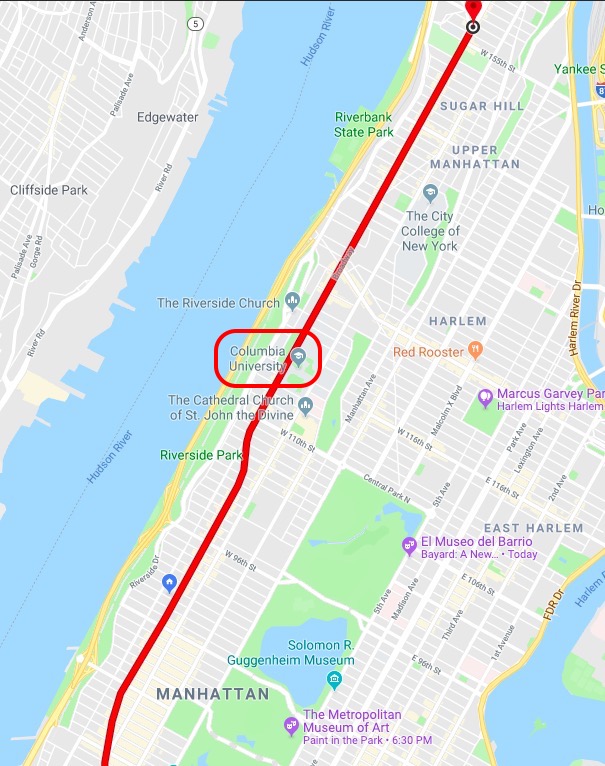 The bus opens up off-campus housing options East of campus and could lead you to areas in East Harlem.  There are more affordable housing options in the area but is also considered as one of the more 'sketchy' areas of the city.  Generally has more riff-raff, feels a little less safe, and just seems dodgy.

As long as you live around the 116th street and 125th street crosstown buses, it will keep you within that 30 minute commuting period. 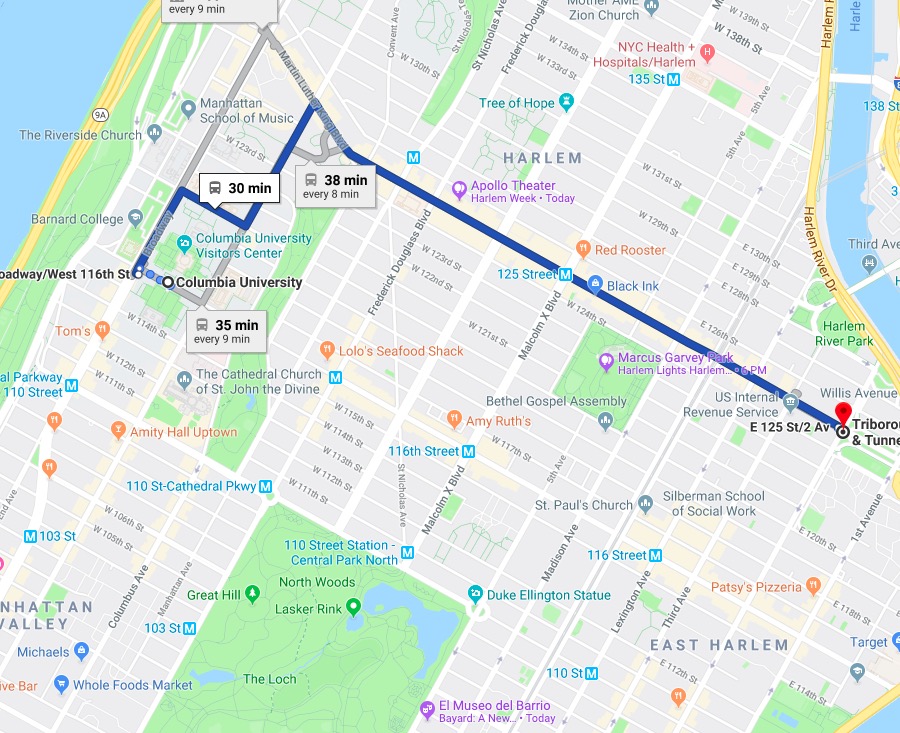 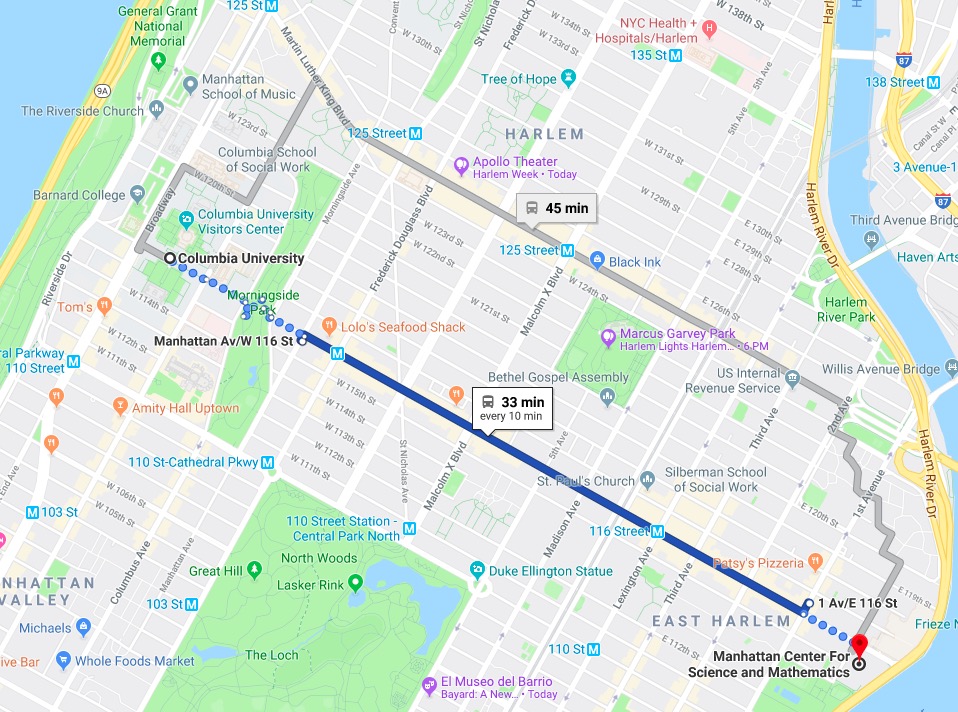 One of the best-case scenarios of course is to find an apartment that is within walking distance to campus.  The running adage is that it conservatively takes 2 minutes to walk one NYC street block and 5 minutes to one NYC avenue.  That puts the off-campus housing range of options at the 90s to the 140s north and south and then as far east as Malcolm X Boulevard. 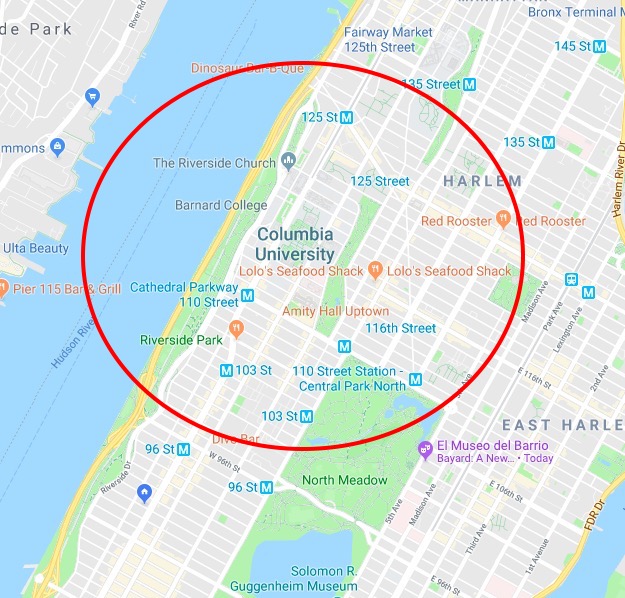 What Are Your Actual Columbia Off-Campus Housing Options

Realistically, off-campus housing for university in NYC comes down to a few solutions:

You get your name signed onto the main lease agreement with the landlord/property owner.  Whether you are renting alone, with a significant other or have found a few prospective roommates to live with, the idea here is to have the apartment be your own by getting your name(s) on that lease. The vast majority of people go this route because the assurances of long term housing is more guaranteed considering most lease agreements are a minimum of 1 year.  This time frame rightfully aligns with university programs that range between 1-5 years.  How do you find these off-campus apartments?  This is also narrowed down to two solutions: 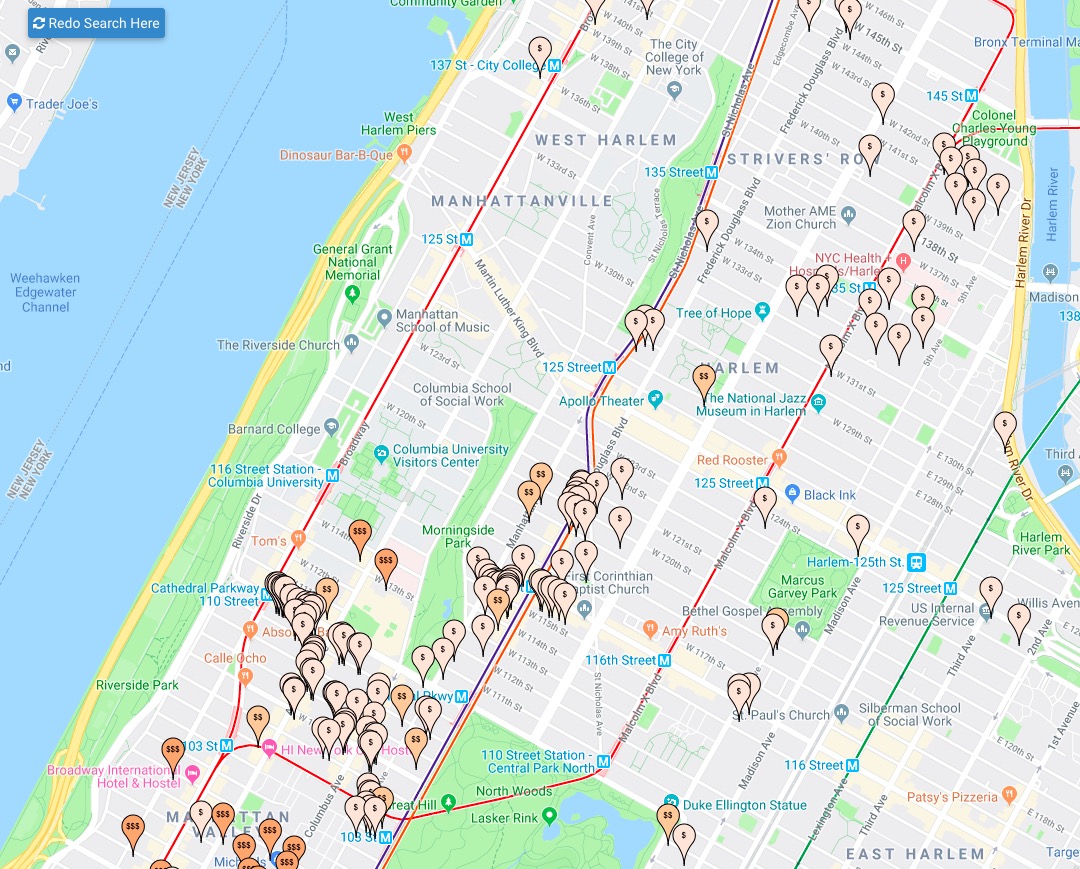 Rent By Taking Over Someone Else's Apartment Entirely

Mainly as a sublease.  This means looking for an apartment with an existing renter who is looking to get out of his/her apartment for whatever reason and take over the place.  This is almost entirely done online and can be researched through different platforms.


Renting Rooms Within An Apartment

Mainly shack up with people you don't know.  There has been an explosion in NYC co-living over the last 5 years with the success of co-working space WeWork.  Startups have taken the same concept and have applied it to residential renting.  The options range from renting an empty room, to roommate matching, to subleasing a room from an outgoing tenant.  This is also entirely done online.  There aren't brokers to assist with this process.

What Are Good Online Sources To Use

Of course you have Columbia's own housing resource guide which has been edited and kept up over the years that provides a list of apartments near Columbia University.  Interestingly enough, it may just lead you back to Transparentcity.co 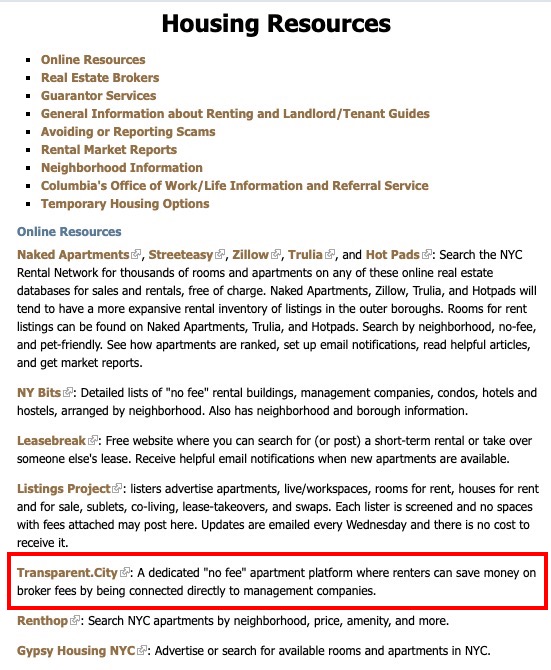 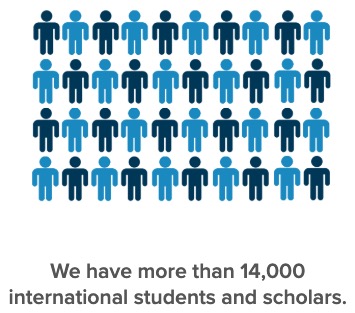 For Out Of State Students

Company
Get In Touch
transparentcity © 2020